The story of Sivali Thera

The story of Sivali Thera 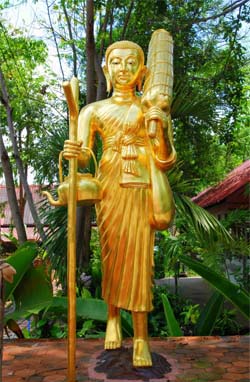 At the time of the Buddha Gotama there reigned a righteous King and Queen named Koliya and Suppavasa. After some time Queen Suppavasa conceived a child. The unborn child brought great fortune to the kingdom. Not only did the queen receive many gifts from friends and relatives, the whole kingdom became prosperous. Crops grew in abundance and everyone was well-fed and healthy.

The queen grew heavy with child but when the natural time for the birth arrived, she failed to deliver the baby. She grew uneasy as time passed by with still no signs of the birth, and asked the King to invite the Buddha and His retinue of monks for a meal. After the meal the Buddha blessed the queen by saying: "May Suppavasa, daughter of the Koliya clan, Be happy and healthy and give birth to a healthy son."

After the Buddha left, the queen gave birth to a beautiful, healthy son. As a mark of respect for the Buddha, who had eased the queen’s heavy burden with His blessings, invited the Buddha and his retinue to receive alms at the palace for seven days. They named the prince Sivali, as from the time of his conception; the people’s hardships were alleviated through an abundance of rich crops.

One day when Shariputra was on his alms round he visited the prince and informed him of the suffering that he and his mother had undergone because of the delayed pregnancy. Shariputra then went on to explain to the prince the unwholesome action that his mother and he had performed and the resulting effects of their actions.

In a previous birth Sivali had been born as the King of Benares and had waged war on a neighboring kingdom. He had surrounded the kingdom and told the citizens to surrender or fight back. When they refused to surrender, in collaboration with his consort, his present mother, he had decided to surround the city and hold them hostage until they did so. The citizens, who did not want to fight back or live under the rule of such a king, had not surrendered. As a result, they had suffered greatly without food for a very long period. Many of the sick and the elderly had died but the arrogant king and his queen had not given in. Many months later the King had withdrawn his troops and released his hostages but he had paid dearly for the suffering he had caused. At death he was reborn in Avichi hell. The delayed pregnancy and the suffering he and his mother had undergone resulting from the delay were the residual effects of this action.

After illustrating the Noble Truth of suffering, Shariputra asked the prince if he would like to join the Noble Order so that he could seek the path to end all suffering. The prince was overjoyed at this invitation and agreed to join the order with his mother’s permission.

The queen, who was a devoted follower of the Buddha, agreed. She escorted Prince Sivali in procession to the monastery to be ordained. On the day of ordination when they shave his hair, Shariputra advised Sivali to meditate on the impurities of the body. Sivali, who was spiritually advanced resulting from previous wholesome actions, focused his mind as instructed. Before the completion of the shaving of his hair, Sivali attained the supreme wisdom of Nibbána.

The monks soon noticed a strange phenomenon when they were with Sivali as Sivali always seemed to have an abundance of rich, fragrant food and the other requisites (robes, shelter and medicine). Monks who were with him also had the opportunity to share in the bounty. Wherever Sivali went, people flocked around to prepare food for him. Donors offered Sivali with all the requisites of a monk every time he went on his alms round.

Therefore, it was that wherever Sivali traveled both people and devas supported him. He and his retinue of 500 monks were in an uninhabited forest for seven days, but they were not short of food. The Devas made sure that they fulfill all his requirements. Similarly, when Sivali was traveling through the desert he was well provided with requisites.
The Buddha, seeing that Sivali was fulfilling a previous aspiration in His reign, declared that he was foremost among the monks in obtaining requisites. He also instructed monks who were traveling on long, tedious journeys through uninhabited terrain be accompanied by Sivali, as with him by their side they would be ensured of the requisites.

In fact, on one occasion when the Buddha and His retinue of 30,000 monks were traveling to visit the monk Khadhiravaniya Revata (Shariputra’s younger brother) they had to cross an uninhabited forest. Ánanda, fearing that they would not be able to obtain food in the jungle for such a large number of monks, questioned the Buddha about the logistics of the journey.
The Buddha assured Ánanda that they had nothing to worry about as Sivali was with them. With Sivali present, there would be no shortage of food because even the Devas reveled in taking care of his requirements. That's true,all gods and unseen creatures in the jungle gathered to pay respect to Sivali and brought a great deal of food for all .


Sivali is worshiped by Thai people as the greatest fortune-fetching monk. Sivali was an important disciple of Lord Buddha. He was praised by the Lord as the most miraculous monk for fortune. Some say that Thai Bhikkhu’s pay reverence to Sivali Thera that brought prosperity to Thailand, a Theravada Buddhist country. Sivali thera was also known as the deity who brought in good luck and wealth in abundance.